When you think about Hypnosis, you might have some ideas, beliefs and images in your mind related to what you’ve seen on television or in the movies. Hypnosis is a relatively young discipline but also a very ancient practice. In this article, I’ll do my best to explain you what hypnosis for actors is, and why is hypnosis for actors useful.

According to Wikipedia, Hypnosis is “a state of human consciousness involving focused attention and reduced peripheral awareness characterized by an enhanced capacity for response to suggestion.”

This definition makes it clear that hypnosis is a state of consciousness. It’s actually a very natural state of consciousness that we experience on a daily basis every time our attention is focused on something. You can enter in hypnosis while driving your car, while watching a movie, or listening to someone really interesting.

As actors, you experience a state of hypnosis every time you’re in a scene or exercising your imagination or practising method acting exercices. My point of vue is that acting and hypnosis have a lot in common. I’ll say more about that later in this article.

Click Here to Watch a Video on How Hypnosis Works

The state of trance

The state of hypnosis is also refered as hypnotic trance, or trance state. In many cultures, this state of trance is used to cure diseases or mental problems. This state of trance can be induced using drugs in some cultures, dance and rythm, or story telling and talking as it is in hypnosis.

The state of Trance has some characteristics that you can recognize in your daily life : focused attention and suggestibility. That’s why hypnosis can be used to induce a positive change by giving positive suggestions.

It has also been used in your life to give you negative suggestions : many child are hypnotized every day by their teacher or parent and receive negative suggestions such as “you’re not good enough”, “you’re a bad boy/girl”, and so on. In these cases, focused attention is induced by authority. Someone who has authority is naturally focusing attention on what he says.

The same mecanism can be used in hypnosis for actors and is known as suggestibility tests. For example, an hypnotist could say “sit on the chair, put your hands on your knees, close your eyes and relax into an hypnotic trance state”. As the first orders are accepted, the next one will be accepted more easily.

There are many levels of trance state. Some are very light and some are very deep. In the daily life, you probably experience light states of trance. Some deep trance states involve a paralysis of the body. Just as if the body is asleep, but the mind is still awake. That happens sometimes naturally before sleep or when you wake up.

Remember : the state of trance is natural and everyone experience many of different states of trance every day. Now, when you learn hypnosis for actors and self-hypnosis, you can gain control over these states of trance and use it for your personnal benefit.

Hypnosis is widely used around the world to induce changes in people’s behaviors. As I said earlier, the state of hypnosis makes you more available to suggestions. Which means that you can receive suggestion for a better life.

Hypnosis is used in sports to help athletes improve their concentration and performance. Hypnosis  can be used to overcome limitations that someone might have in his mind. For example, many golfers now use hypnosis to increase their performance by visualising their goal and enter the perfect state of consciousness to perform.

Some people use hypnosis to quit smoking or change their eating habits, lose weight, be more confident or increase their concentration at work. The applications of hypnosis is almost unlimited. Hypnosis can also be used for aenasthesia before surgery or to recover quickly from a disease.

When you don’t rely on your subconscious mind, that’s when you experience self-consciousness and performance anxiety. You try to consciously control your performance and the end result is that you make it worse.

Escape stage fright and enjoy performing again with this download ! 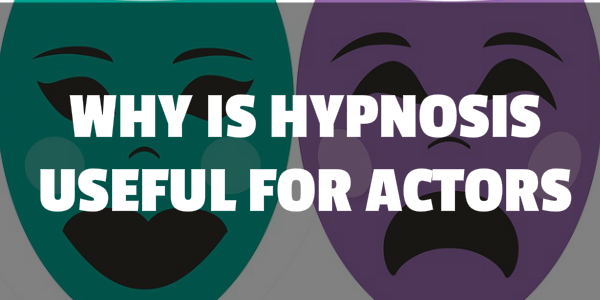 Why Is Hypnosis For Actors Useful

Acting is a state of transe

Remember the characteristics of the trance state ? Focused attention and suggestibility. When you’re in an acting exercice, focused on re-creating a particular circumstance or place, you are already in a state of trance. Your attention is focused on whatever you’re creating, and you’re open to the suggestions of your acting coach.

When you’re in a Meisner repetition exercice, your attention is focused on your partner and your imagination is awake.

Every time you’re working on an acting exercice, you’re entering some kind of a trance state. That means your attention is focused and that also means that you’re more suggestible.

Now, that’s a good thing because that makes you available to directions. Your imagination is awake, and you have an experience of modified consciousness. That also means that you’re more vulnerable to suggestions, positive or negative. That’s why you can feel really bad after a negative feedback from a teacher. Because you were already in state of trance, and their feedback works as a negative suggestion on you.

Actors are very suggestible, they have to be in order to give the best of themselves. Actors have to be open and accept suggestions from their coach or acting teacher or director to be able to perform at their best. That’s why they can also be so vulnerable and have a very negative self image. Some actors can be completely destroyed by negative suggestions from their teachers, directors or collegues.

Acting teachers and acting coachs have an enormous responsability over their students. I hope most of them understand that and are looking for ways to improve their communication in order to preserve their students.

As actors, we also have the responsability to learn about our own mind and to be able to use it at the best. That’s why hypnosis for actors is so useful.

That’s why Method Acting can have a negative reputation as many actors seem to be damaged and unable to recover from a particular role. That’s a shame that some actors are able to use their instrument to produce wonderful character, but are unable to use it for their lives. Many actors use drugs and have self destructive behaviors when they could be using their skilled imagination to have a better life.

Use hypnosis to improve your method acting here !

Now, you understand that acting and hypnosis is very related. Acting can help you in your daily life, but it can also hurt you, depending on the characters you’re working on, and who you’re working with.

You can overcome stage fright or performance anxiety in a few sessions.

The science behind acting

Today’s modern acting is mostly based on the work of Stanislavsky. Contemporary to Stanislavsky was  Ivan Pavlov, the famous physiologist known for his work on classical conditioning. At the same period, Sigmund Freud was working on his theory of Psychoanalysis.

There is a science behind acting, and Stanislavsky probably knew about it. Psychology has evolved since then, and Acting has evolved. I believe that hypnosis is a science that can provide acting with many practical tools and insight on the technique of Acting.

Click Here to have a complete view of what Hypnosis can do for you !

1 thought on “Hypnosis For Actors : What Is It And Why Is It Useful”